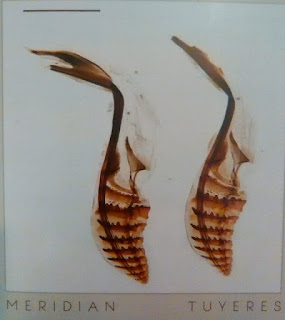 Meridian are Tim Feeney, Sarah Hennies and Greg Stuart.  A tuyere is a tube or pipe which enables air to be blown into a furnace or hearth, sometimes under pressure.  Indeed, it seems plausible that some of these sort of devices were obtained by Feeney, Hennies and Stuart and used as the source of the noises contained within this imposing disc.  Or are they slyly using the term to refer to themselves as devices to get the fires of this music burning?
Tuyeres contains three beautifully crisp recordings, let's assume documenting a series of actions against and within these curious objects and other things.  Possibly involving water, sand, leaves, or possibly not, because I’m guessing – there’s no information regarding the means of production on the sleeve.  Feedback is generated somehow, and in different ways, doors bang shut, matter grinds itself into other, different, kinds of matter.  I think I can hear stuff activating the head of a drum, and bowed metal.  All the while, deliberate activities are mixed with accidental soundings and even people just dropping stuff occasionally.  Of course, this is not sheer carelessness, it is the product of a very highly developed strategy.  Activities start and stop, seemingly at random.  These brief passages of silence are, indeed, just as important as the sound.  They bring the sounds more into focus, as if you were looking through a magnifying glass at an insect colony, or through a telescope at morning clouds on the horizon.
The three tracks don’t appear to be named, unless we are to assume they are named after the protagonists.  They diminish in duration thus; the first piece is 20 minutes long, the second 15 minutes and the third just seven.  It seems to me as if this is one performance divided into three parts - the ID points for the beginning of each track may have been selected arbitrarily: track three starts halfway through a burst of feedback at the end of track two.  Which is unconventional, for sure, but also a quite charming.
As with all Caduc releases, the packaging is as beautiful, and inscrutable, as the sounds contained within.  The beautiful drawing by Mathieu Ruhlmann on the front of the full colour sleeve depicts what looks to me like a pair of cocoons of some description; exotic or domestic I’m not sure.  No matter - this disc comes highly recommended from me.

http://www.caduc.org/catalogue.html
Posted by aural detritus at 06:35