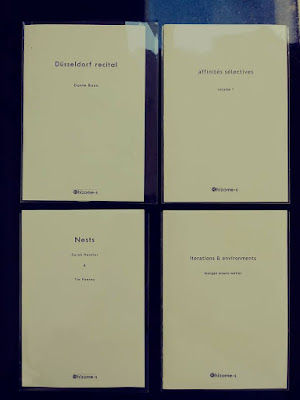 Composed and performed by Sarah Hennies and Tim Feeney.  Recorded by Matthew Saccuccimorano at Silo City, Buffalo, NY  August 2016.
An hour of languorous threading together of signal and silence; repeated motifs overlaid against a patchwork of rests.  The signal is reminiscent of droplets, but could be in actuality generated in many different ways – perhaps woodblock hits, or using toneblocks, or claves; even a Max/MSP patch or similar designed for this specific purpose?  Maybe we’ll never know.  There is the occasional variance in pitch, so there’s clearly more than one of the thing the artists are using to facilitate the piece; and reverberation and what could be heavy EQ-ing or filtering of some sort is used at certain points.  Gaps of silence are also employed at critical intervals, seemingly of progressively longer duration.
You’ll need the time to commit to it, but given an appropriate degree of concentration it gives results.  I like it.  A sensitive, sensational appraisal of sound.

Known as a composer in his own right and a skilled interpreter of contemporary piano music, Dante Boon presents his 2016 piano recital at Jazz-Schmiede in Dusseldorf, which was part of Klangraum 2016.  The concert recording was edited and mastered by the authoritative hand of Bruno Duplant.
A beautiful hour of music.  Not the most maximalist of chosen material, but perhaps this is to be expected from a member of the Wandelweiser collective.  In fact, Boon steers clear of anything too “experimental” in his selections; these pieces by Coleman Zurkowski, Gil Sansón, Anastassis Phillippakopoulos, Eva-Maria Houben, Assaf Gidron and Jack Callahan all take a fairly orthodox approach to piano, albeit as orthodox as Wandelweiser gets.  The Wandelweiser link continues: Phillippakopoulos and Houben are also members; Gil Sanson’s Untitled (for Antoine Beuger) is dedicated to the Wandelweiser composer.  Boon’s selection of the running order of the material is effective, keeping an interesting flow and dynamic to his performance as a whole.  For sake of clarity and thoroughness, here is the full repertoire:

Overall, highly enjoyable - this is a disc I keep returning to.

Two live recordings on this disc.  The first four tracks are from a session featuring Gaudenz Badrutt, Ilia Belorukov and Alexander Markvart titled “back-feeder i-iv”.  The beginning of this is brilliant – it is mastered brutally loud so that you don’t miss a single decibel of the abrasive feedback artefacts on offer; the kind of abrasive feedback artefacts usually found in an inexperienced teenaged bands’ rehearsal space between songs.  However, if you’re a fan of, say, Seth Cooke’s process works or Henrik Rylander’s feedback obsessions, you are in for a treat.
Aside from a dash of radio, the sounds are characterized by commonly-perceived “mistakes” and “errors” in standard methods of sound reproduction.  Pops, static, blasts of electrical noise, stirrups, jumps, clones, piaffes, contact, no-contact, engagement, flying change, half-pass, leg yield, on and back, piaffe, pirouette, shoulder fore, shoulder in, travers, turn-on-the-forehand and so forth, and in abundance.
For the detail-obsessed among us, Gaudenz Badrutt is credited with “acoustic sound sources” and live sampling; Ilia Belorukov alto saxophone, electronics, field recordings and samples and Alexander Markvart on prepared acoustic guitar, guitar combo and objects.  Recorded march 2016 at espace libre, biel/bienne, Switzerland.
Track five is a piece called “gezeugt” or “Begotten”; recorded at Le Non Lieu in Roubaix, France; this group comprises Quentin Conrate on percussion, Matthieu le Brun on alto saxophone and electronics, Anne-Laure Pudbut on tapes and electroacoustic devices and Frédéric Tentelier on organ and electroacoustic devices.  This second grouping produces one single piece of music of a kind of desiccated drone; it sheds its dried outer layers of sound like an aural confetti.  Most pleasant, and a good complement to “back-feeder i-iv”.

Two pieces on offer here;
“Iterations” - spiralling cascades of violin; like a drone heard by the unwary, but focus in and the strings fold over each other like a murmuration of starlings or a particularly active beehive.  Like when you are grinding coffee and you watch the beans fall over themselves in slow motion into the vortex, slowly becoming smaller and smaller particles.  There’s a gradual decay to the middle section of the piece, not unlike how the spin of that fresh cup of coffee slows down its revolving after you finish stirring it, the cluster of bubbles marking time as you eventually come to your senses before leaving the house for work.
and
“Environments III” - here Evans-Weiler uses “electronics” – no further detail – to produce waves of bass-heavy pure tone and occasional ear motes in the higher registers, while accompanied by Emilio Carlos Gonzalez on piano.  Interestingly, I think I can still hear violin-like sounds from time to time, which I presume is courtesy of Evans-Weiler’s set-up.
Compared to Iterations, there is far less turmoil over the course of this shorter piece, although the intensity is ramped up toward the end of the piece by subtle shifts of pressure in the bass information.
Morgan Evans-Weiler has previously worked with the likes of Seth Cluett, Sarah Hennies, Ryoko Akama, Antoine Beuger and is director of the Ordinary Affects ensemble who, interestingly, have premiered works by Wandelweiser composers Jürg Frey, Antoine Beuger and Michael Pisaro.

http://rhizome-s.blogspot.com/
Posted by aural detritus at 05:56